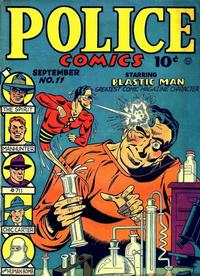 [The Brain of Cyrus Smythe] (Table of Contents: 1)

Genre
superhero; humor
Characters
Plastic Man [Patrick "Eel" O'Brian]; Captain Murphey (Mammoth City Policeman); Tad Wilkins (introduction, death); Mr. Wilkins (death); Mrs. Wilkins (death); Valda; Shirley; Father Time (cameo); Cyrus Smythe (villain, introduction)
Synopsis
Cyrus Smythe was a super-powered villain who was killed in 1642 by a monster of his own creation, and left in a vat of chemicals that allowed his body to die but the brain to remain alive. Soldier Tad Wilkins died centuries later near the grave of Smythe, and medics mistakenly implanted Smythe's brain into Wilkins and Smythe assumed the soldier's life in America. Soon he came into conflict with Plastic Man and his body died.....but the living brain was once again buried.
Reprints

A similar freak, Giganta, appeared in Wonder Woman #9 (1944), having elements of both size-changing and brain transference.

[The Tire Thieves] (Table of Contents: 5)

Manhunter wears new costume without a mask, red armlets or chest symbol (which has moved onto his belt).

[The Origin of the Spirit] (Table of Contents: 8)

This appears to be the first "The Spirit" story to receive national magazine distribution. The original newspaper comic-book inserts appeared in only a handful of markets, and none were further west than Minneapolis.

Ebony White, the hero's future sidekick, appears in only one panel as an unnamed cab driver. The character, who is African-American, was written and drawn as a racist caricature.

The Monster of the Swamps (Table of Contents: 9)

[The White Gardenias] (Table of Contents: 11)

Genre
superhero
Characters
The Firebrand [Rod Reilly]; Slugger Dunn; Joan Rogers; Senator Barrow; The White Gardenias [Senator Beep; others] (villains)
Synopsis
Firebrand must battle a local hate group that is attempting to halt the activities of a U.S. Senator that promises to expose the group.
Reprints

The Order of the White Gardenias were a true-life branch of the KKK.

Produce the Body (Table of Contents: 12)

[The Murder of Malcom Munsey] (Table of Contents: 13)

Genre
superhero
Characters
Phantom Lady [Sandra Knight]; Don Borden; Lieutenant Bob Forbes (of U.S. intelligence, death); Nazis (villains)
Synopsis
Sandra and Don witness the murder of a U.S. intelligence officer who had been working on the suspected sabotage of an American re-fueling station. The Phantom Lady discovers some Nazis are responsible and they are operating through the office of a wealthy jeweler.
Reprints
Keywords
Black Flash (aka Black Beam)