Available as a scan at goldenagecomics.co.uk.

Hal Rasmusson was the artist of the comic strip "Aggie Mack". This cover resembles samples online of those strips. The interior comics aren't as finely drawn and are unlikely to be his work. 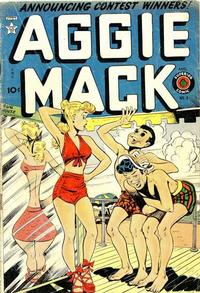 A Day at the Circus (Table of Contents: 2)

Genre
teen
Characters
Aggie Mack; Mona Mack; Bobo
Synopsis
Aggie and Mona end up at the circus, battling for a summer job at the newspaper.

No Greater Luv (Table of Contents: 3)

Genre
teen
Characters
Aggie Mack; Bobo; Daphne
Synopsis
Bobo ends up with a snake in a basket after another passenger leaves it behind on a bus.
Reprints

Kim and the Rice Pirates (Table of Contents: 4)

Genre
teen
Characters
Aggie Mack; Bobo
Synopsis
Bobo buys a used motorcycle so that he and Aggie can take part in a scavenger hunt but they end up in a graveyard with a stolen skeleton.

It's the Plane Truth, Aggie! (Table of Contents: 6)

Genre
teen
Characters
Aggie Mack; Bobo; Chillie
Synopsis
Bobo finds out that Chillie's been cheating to win Aggie's heart and that he doesn't know how to fly a plane after all.

Synopsis
List of winners of a contest from a previous issue. Most addresses are in the United States but at least a couple are from Canada.