This image is repurposed for use on the the front or back cover of Boys' and Girls' March of Comics (Western, 1946 series) #184, but without the fish-shaped hole in the ice, thus negating the gag.

The reprint image of ice-fishing Woody was not used as a cover for March of Comics as that issue had its own original cover also drawn by John Carey. Instead, it appeared as a spot illustration (placed in otherwise blank space) on either the front or back cover, depending on the variant. 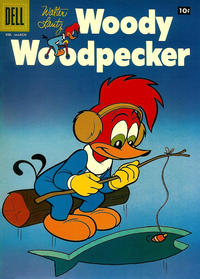 [The Perfect Picture] (Table of Contents: 1)

Something Fishy (Table of Contents: 4)

In the single illustration, Bully Bear is colored brown, rather than his usual "polar-bear-white".

Kids Will Be Kids (Table of Contents: 6)

The awkward transition from panel one to panel two seems to indicate that this story was trimmed to make room for the Statement of Ownership that occupies the bottom tier of this page.

Statement of Ownership for October 1, 1957. No circulation figures appear as part of this report. Lower tier (1/4) of page.

Black and white on inside back cover. Shares the page with the Dell Pledge to Parents (in final panel).