Cover code: 10038-102 Last issue of this series with the configuration of advertisement pages and “Gold Key Comics Club” pages (that is “non-story pages”) that had been in effect since the Gold Key Comics issues that were released in January, 1967. (In the case of the “Uncle Scrooge” title, that would be issue #68.) Those issues limited such non-story pages to the four pages of the centerfold, and the final two interior pages (interior pages 31-32) for a total of SIX pages carved-out of each issue. Beginning with the next issue (Uncle Scrooge #92), the number of non-story pages would be increased to SEVEN scattered throughout the issue, and would begin on interior page four. It would continue to increase throughout the 1970s.
Keywords
change in advertising configuration 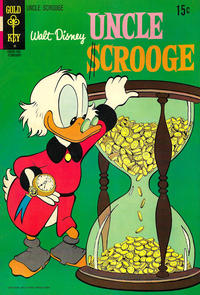 First Line of Dialogue or Text
Tell us again, Unca Scrooge, how you made all of this money!
Feature Logo

"Reprinted by popular demand". Four pages of Gold Key Comics Club material and advertising, comprising the centerfold, occur between pages 14 and 16 of this story.

Jokes on You (Table of Contents: 6)

First Line of Dialogue or Text
What has a head and a tail but no body?
Characters
Gold Key Kid
Synopsis
Jokes and riddles submitted by readers.
Keywords
jokes; riddles

First Line of Dialogue or Text
That movie was so real-looking, it almost looked possible to build life from molecules!
Feature Logo

First Line of Dialogue or Text
“Oh, Goofy,” trilled Minnie one day, “the boys have been telling me about your wonderful magic tricks!...”
Genre
anthropomorphic-funny animals
Characters
Goofy; Minnie Mouse; Morty and Ferdie; other kids
Synopsis
Goofy charms a kids’ party with his inept magic and allays fears with his calming manner during a lightning storm.
Keywords
children; lightning; magic; party; storm; turning-lemons-into-lemonade

The Waste-Saver (Table of Contents: 9)

Your Future As a School Counselor (Table of Contents: 10)

First Line of Dialogue or Text
You will help direct the destinies of many young people – perhaps even the destiny of the world – if you choose to be [a] (sic) school counselor.
Keywords
editorial feature

One of a series of text articles on possible careers, accompanied by illustrations. Top half of page.

Statement of Ownership, Management and Circulation (Table of Contents: 11)