Last issue of the series, and one of the last few issues published before Harvey ceased operations for four years.

First Line of Dialogue or Text
If anyone can find out what's wrong with it, Irona can!
Genre
children
Characters
Richie Rich; Irona; Bascomb
Synopsis
Irona speaks with the engine of an ailing Rich limousine to help diagnose its issues. 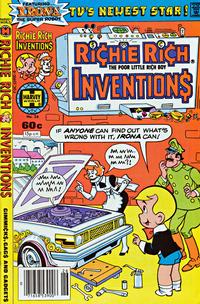 Story continues in "A-Maze-Ing", later in this issue.

First Line of Dialogue or Text
Hello, Richie? Can you name the seven seas?
Genre
children
Characters
Richie Rich; Gloria Glad; Richard Rich
Synopsis
Gloria asks Richie to name the seven seas, and when he can't think of them all, his mind turns to what is familiar.
Reprints

First Line of Dialogue or Text
Oh, that's pretty, Mrs. Rich!
Genre
children
Characters
Irona; Regina Rich; Cadbury
Synopsis
Although Irona was not "born", she finds the equivalent of a birthstone for herself.
Reprints

Although the listed feature for this story is Richie Rich, Richie never appears in it.

Genre
children
Characters
Richie Rich; Irona; Puzzle-O; unnamed crook; Dollar
Synopsis
Puzzle-O opens a "burglar-proof" vault, revealing a crook who has tunneled his way inside. Puzzle-O's puzzles and riddles make life difficult both for the crook and for Richie and Irona, who are trying to catch the crook as well as Puzzle-O. When Irona spanks Puzzle-O, his cleverness disappears, but at least Richie and Irona are able to catch the crook.

Story and page numbering (6-10) continue from "Puzzle-O", earlier in this issue.

Genre
children
Characters
Richie Rich; Jasper James; Krutch; unnamed mint worker; Cadbury; Gloria Glad
Synopsis
When Richie's allowance money turns white, he calls the mint and stumbles upon some crooks scheming to make a fortune by purposely creating currency that becomes discolored but can be restored later. The crooks recognize Richie's voice from the phone and prepare to takes as much of the white cash as possible before the authorities arrive. Richie recruits Cadbury to "track down some criminals" and they are joined by Gloria, who thinks they are just going for a ride.
Reprints

Story continues in "Color Me Green", later in this issue.

Genre
children
Characters
Regina Rich; Richard Rich; Richie Rich
Synopsis
Seeing Richie's nursery during a walk through the Rich mansion brings back memories of Richie as a baby to his parents.
Reprints

The Magic Color, Part 2: Color Me Green (Table of Contents: 7)

Story and page numbering (6-10) continue from "The Magic Color, Part 1" earlier in this issue.