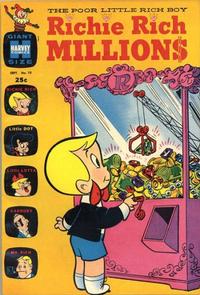 First Line of Dialogue or Text
Ah—shucks! Drat the luck!
Genre
children
Characters
Richie Rich
Synopsis
Richie plays an arcade-style claw machine game filled with gems, jewels, gold coins and rolls of cash, along with other prizes. He is frustrated when he wins several high value items, but leaves in triumph when he wins a gumdrop candy.
Reprints

First Line of Dialogue or Text
Do you have your ticket for my movie, Lotta?
Characters
Dot Polka [Little Dot]; Lotta Plump [Little Lotta]; Tina; Linda
Synopsis
Dot punches the tickets of friends coming to see a movie at her house.
Reprints

Genre
children
Characters
Richie Rich; Elmore; Richard Rich; Cadbury; Regina Rich
Synopsis
A prospective butler drops by to leave his card. Mr. Rich politely refuses, saying that they already employ Cadbury, who is an excellent butler. Shortly thereafter, Mrs. notices that an expensive item is missing, and soon Mr. Rich and Richie notice other that valuables are missing too. Richie wonders if anything may be missing from Cadbury's room, and when they go to check, they find a pile of valuables there, including the missing items that they were looking for. Cadbury has no explanation for why the items are in his room, so Mr. Rich has no choice but to dismiss him.
Reprints

Story continues in "The Butler Did It!", immediately following in this issue.

The Butler Did It! (Table of Contents: 4)

Story continues from "Cadbury Fired!", immediately preceding in this issue. This story is different from "The Butler Did It" in Richie Rich Millions (Harvey, 1961 series) #88, which involves a Cadbury robot.

Genre
children
Characters
Cadbury; Regina Rich; Mr. Soundtrack; policeman; pedestrians; movie producers; actors; director; cameraman; assistant
Synopsis
Cadbury is invited to play a part in a Hollywood film, and once there can do just about anything once he sets his mind to it. Unless, of course, he's on camera.
Reprints

First Line of Dialogue or Text
I'll call you up when I get my homework done, Dot!
Genre
children
Characters
Dot Polka [Little Dot]; Lotta Plump [Little Lotta]
Synopsis
Lotta is able to contact Dot from four blocks away without a telephone.
Reprints

Genre
children
Characters
Richie Rich; Richard Rich; hoodlums; Hopocus the Magician; audience members
Synopsis
Richie tries out a suit which allows its wearer to instantly travel to a preset destination. He uses it to befuddle some hoodlums and to surprise a stage magician. But as part one of the story ends, he instantly travels not home, but into the middle of a river.
Reprints

Story continues in "Going, Going, Gone!", later in this issue.

The Good Skate (Table of Contents: 8)

Genre
children
Characters
Richie Rich; safari hunters; party-goers; Sybil; Richard Rich
Synopsis
Richie accidentally pushed the wrong button on his travelling suit and wound up in a river in the jungles of Borneo. Some hunters there want to capture him to get his "silvery suit", but he instantly travels to London, where he is invited to join a children's costume party.
Reprints

Story continues from "Instant Travelling", earlier in this issue.

Genre
children
Characters
Richie Rich; Gloria Glad; Mr. Glad; unnamed city workers, unnamed pedestrians; unnamed sandwich board advertiser; unnamed flower delivery man
Synopsis
It's Richie and Gloria's one-year anniversary, and Richie wants to do something extra special. Gloria is at home working on her homework, but her thoughts keep straying to Richie. Her father tells her that she just needs to concentrate, something he has no problem doing when he needs to. However, as Mr. Glad goes about his day, he is annoyed to find that he cannot stop thinking of Richie himself, because Richie has posted anniversary messages to Gloria by every means available. As Gloria finishes her homework, Richie pays her a visit and Mr. Glad is still trying to focus on something else.
Reprints

First Line of Dialogue or Text
They sure treated you royally in the railroad terminal, Richie!
Genre
children
Characters
Richie Rich; Lester; Richard Rich (mentioned only)
Synopsis
It seems as though every building or business that Lester points to as he and Richie walk around the city is owned by Richie's father. He is relieved to hear that isn't the case with the Second National Bank, until he learns that Richie owns that himself.
Reprints

The Timid Hero (Table of Contents: 15)

This story is very similar to the text story, "The Chicken Kid", which appeared in Richie Rich Success Stories #5 in November, 1965.

Genre
anthropomorphic-funny animals
Characters
Papa Pup; Mama Pup; Lemuel; policeman
Synopsis
Papa Pup is angry at Lemuel for painting mustaches on every picture around town, until something good happens as a result.
Reprints

Vacation Out West (Table of Contents: 18)

The Unwelcome Guest (Table of Contents: 19)