On sale date from publisher advertisement.

This cover depicts a larger version of panel 4 from ["Blam!"], the first comic story inside. 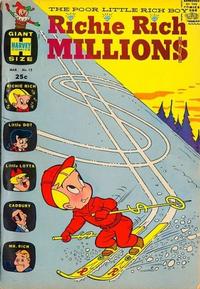 The scene on the cover is taken from panel 4 of this story.

This story acts as a prelude to the three-parter immediately following.

This one page story acts as a conclusion to the three-parter immediately preceding it.

The Right Shape (Table of Contents: 12)

First Line of Dialogue or Text
What do you think Richie will give you for your birthday, Gloria?
Genre
humor; children
Characters
Richie Rich; Gloria Glad; Gloria's friend; hamburger chef
Synopsis
Richie goes overboard to get Gloria a hamburger for her birthday.
Reprints

The Molehill Mountain (Table of Contents: 17)

Genre
humor; children
Characters
Richie Rich; Gloria Glad; Herb Dripple; Nifty Dry Cleaners manager (Mr. Dripple?); Richard Rich; Mr. Jones; Perkins; Wembley Chemical Company receptionist; Mr. Hyde; unnamed police officers; Mr. Digby; unnamed butler
Synopsis
Although Herb Dripple wants to take Gloria to the school dance, she has already been asked by Richie. But she and Richie learn that the dress she wants to wear is at Nifty Dry Cleaners and won't be ready in time. Richie is determined to find a way to get her dress despite the obstacle. He visits successfully higher authorities in the matter, learning that Mr. Rich owns the parent company that ultimately controls Nifty. Despite his efforts, Richie can't get the dress, and he phones Gloria to apologize. She tells him that she has been at the dance with Herb, whose father owns Nifty Dry Cleaners.
Reprints

First Line of Dialogue or Text
Where are you going?
Genre
humor; children
Characters
Richie Rich; fortune seeker
Synopsis
There's no such thing as a pot of gold at the end of the rainbow. Or is there?

Sailor Be Where? (Table of Contents: 20)

The Cowgirl (Table of Contents: 21)

The Winner (Table of Contents: 22)

Genre
humor; children
Characters
Johnny Williams; runners
Synopsis
Johnny learns what it is like to both win and lose a race gracefully.
Reprints

The Riddle (Table of Contents: 23)

Genre
humor; children
Characters
Richie Rich; Gloria Glad; Mr. Jones; unnamed antiques dealer; unnamed art purchaser; unnamed chauffeur; Swifty; unnamed ring purchaser; unnamed mink coat purchaser; unnamed stock traders; unnamed newsboy
Synopsis
Richie decides to buy what he thinks is a $5.00 watch for Gloria. As it turns out, the watch is actually $500, and he only has twenty-five in his pocket. While deciding what to do, he is accidentally hit on the head, giving him amnesia. He remembers that he wanted to buy something and makes a small purchase. Someone immediately offers to buy it for more, knowing who he is and thinking that it must be a valuable painting. In a series of similar trades, Richie eventually ends up with significant funds. Bumping his head again, he regains his memory, whereupon he buys the watch for Gloria.
Reprints

This story should not be confused with a Richie Rich story also titled "It's a Gift" in Richie Rich Billions #18, which also features Gloria but recounts a different series of events.