The Pied Piper of Steel! (Table of Contents) 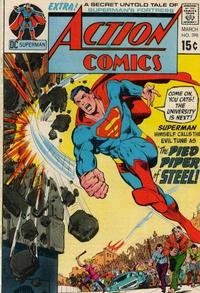 The Pied Piper of Steel (Table of Contents: 1)

Job Number
B-869
Genre
superhero
Characters
Superman [also appears as Clark Kent]; Morgan Edge; Cy Harkin
Synopsis
Rock promoter Cy Harkin develops a method of mind control that is transmitted through the music of the concerts he runs so that he can order the teenage fans to tear down the college that once fired him.
Reprints
Keywords
Daily Planet globe; Fortress of Solitude; Kandor; rock music; WGBS

In this issue, Morgan Edge orders the Daily Planet globe removed from the building and transfers Clark from the Planet to become a roving television reporter.

Spawn of the Unknown (Table of Contents: 2)

Untold Tales of the Fortress
Genre
superhero
Characters
Superman; Supergirl; Professor Bruno
Synopsis
Superman encounters a strange species of plant that alters its appearance to that of animals and humans nearby.
Reprints
Keywords
Fortress of Solitude

Where the Action Is / letters page / 0.67 page (report information)