Copyright registration has "7Feb" for this issue, but that is most likely a mistake and should be "7Jan."

World of the Super-Ape (Table of Contents) 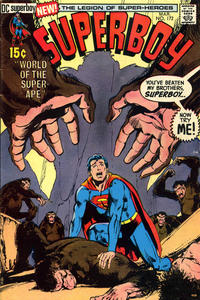 The World of the Super-Ape! (Table of Contents: 1)

Story includes short retellings of the Legion origin story from Superboy #147 and the Lightning Lad/Lightning Lass/Lighting Lord origin. In the fight to subdue him, Lightning Lord's hair is turned white, as it had already appeared in the adult Legion stories.

There is no feature logo on this story, as the feature title varied in the first back-up stories after the series moved to Superboy from Action Comics.