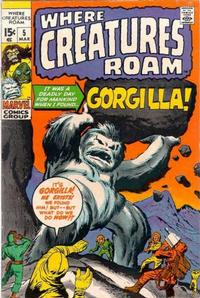 Job Number
V-122
Genre
horror-suspense
Characters
Gorgilla; Scotty; Anne
Synopsis
Gorgilla stows away on a ship to America to contact the human race, but is met with fear and violence in New York. He stumbles across some communist spies and stops an assassination, but is killed by the military out of fear.
Reprints
Keywords
monsters

Something Missing!! (Table of Contents: 3)

Job Number
V-330
Genre
science fiction
Characters
Sally; Tom
Synopsis
The first mission to Mercury has a stow-away, the lover of one of the pilots. The captain is angry, but when they arrive on Mercury they find that the natives are hostile, and only the girl's display of love towards the pilot convinces them that the humans have something of value to offer.
Reprints

He Waits in the Dark! (Table of Contents: 4)

Job Number
V-328
Genre
horror-suspense
Synopsis
A mysterious janitor tries to improve conditions for the residents of a tenement and then faces the greedy landlord in a final showdown.
Reprints