And a Child Shall Destroy Them! (Table of Contents) 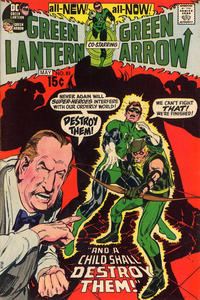 ...And a Child Shall Destroy Them! (Table of Contents: 1)

Job Number
S-683
Genre
superhero
Characters
Green Lantern [Hal Jordan]; Green Arrow [Oliver Queen]; Black Canary [Dinah Drake Lance]; Carol Ferris; Sybil; Grandy; Jason Belmore
Synopsis
Green Lantern and Green Arrow accompany Dinah as she begins a job at a private school where they are greeted by the cook Grandy, a little girl with psychic powers named Sybil, and the owner Jason Belmore. After Belmore asks the costumed heroes to leave, Dinah is confronted by Grandy, who explains that in Sybil he finally found a way to keep the children of the school in order. Green Lantern and Green Arrow return to the school in time to save Dinah, and when Grandy orders Sybil to attack GL, she refuses and brings down the roof on herself and Grandy.
Reprints