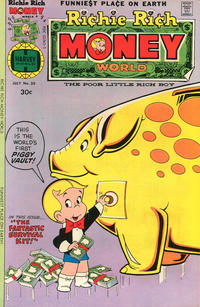 Richie Rich the Poor Little Rich Boy [diamonds dot the I's]
Genre
humor; children
Characters
Richie Rich; Gloria Glad
Synopsis
While cruising on his yacht, Richie shows Gloria the features of his survival kit. While doing this, his yacht hits some rocks and sinks, and the survival kit sinks too.
Reprints

Part 1 of 2. Story continues with "Careless and Kitless" in this issue.

Richie Rich the Poor Little Rich Boy [diamonds dot the I's]
Genre
humor; children
Characters
Richie Rich; Cadbury
Synopsis
While admiring the figures at a wax museum, Cadbury flirts with one that turns out to be a real woman.
Reprints

Richie Rich the Poor Little Rich Boy [diamonds dot the I's]
Genre
humor; children
Characters
Richie Rich; Gloria; a policeman
Synopsis
Richie and Gloria build a shelter and forage for food while stranded on an island. Unknown to Richie, Gloria discovered an emergency phone and called the Rich estate police, who send a rescue boat for them.
Reprints

Casper the Friendly Cub Scout Invites You to Be a Cub Scout (Table of Contents: 8) (Expand) /

Look at these Great Awards from the Greatest Organizations! (Table of Contents: 9)

Reproductions of various awards given to Harvey Comics for their support of UNICEF and scouting organizations.

The Secret of the Desk (Table of Contents: 13)

Genre
children
Characters
Richie Rich; auctioneer; auction attendees; Bugsy Creech; Spike Rugger; truck driver; police officers
Synopsis
Richie is intent on winning an auction for a desk his mother has given away that morning. Some crooks conclude the desk must be very valuable. Turns out it is made of gold, but Richie is more interested in a letter from Gloria he has left in a secret drawer.
Reprints

Disgrace in Space (Table of Contents: 14)