In the Hands of Ultimo! (Table of Contents)

Art credits from Nick Caputo via the GCD Error List (14 January 2005); the original indexer credited John Romita ? with both pencils and inks. 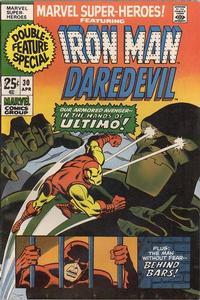 Genre
superhero
Characters
Daredevil; Foggy Nelson; Karen Page; Ox; Ox II [Dr. Karl Stragg] (introduction; death)
Synopsis
The Ox is convinced by his cellmate, Dr. Karl Stragg, that if the two can escape, the good doctor will make Ox smarter. Stragg double-crosses the Ox and switches bodies with the brute. DD tracks down the new and improved Ox only to defeat him permanently.
Reprints

The Silent Giant (Table of Contents: 2)

Genre
horror-suspense
Characters
Ben
Synopsis
An old hermit becomes enraged that the nearby redwood tree will outlive him, but when he dies the tree transforms its friend into an immortal redwood too.
Reprints

A Jack Kirby/John Romita Daredevil head shot is inserted on the splash page to introduce story.

Genre
superhero
Characters
Iron Man [Tony Stark]; Ultimo; Mandarin; Senator Harrington Byrd
Synopsis
Iron Man defeats Ultimo by tricking the monstrous android into setting off a long-dormant volcano! The Mandarin believes Tony Stark is dead, and vows Ultimo will live again. Shellhead steals a Commie jet and narrowly avoids getting shot down by US fighters. But on returning home, he discovers to his horror that Senator Byrd has not taken his failure to show at the sub-committee investigation lightly...
Reprints

The Iron Warrior (Table of Contents: 5)

Job Number
X-147
Characters
Merlin; King Arthur; Black Knight (animated suit of armor); Sir Mogard (Intro)
Synopsis
A knight of King Arthur's court resents the favor shown Merlin and so challenges him to a battle. Merlin's champion, a black knight, wins the competition. The envious knight still sneers at Merlin and claims he has no true magic powers, but Merlin makes a mystic pass and the empty suit of armor falls in pieces upon the ground.
Reprints