The new logo starting with this issue and continuing to the end was created by Warren Kremer; Credits from John Benson in http://www.fantagraphics.com/downloads/stjohnchecklist.pdf

Cover illustrates a scene from the interior story "I Dared to Kiss and Tell." 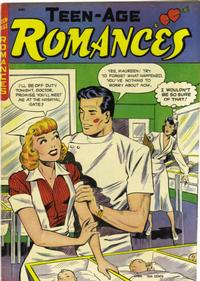 I Dared to Kiss and Tell (Table of Contents: 1)

Title in reprint: "My Rx Love"

We Couldn't Be Kept Apart (Table of Contents: 2)

Genre
romance
Characters
Fred Prentis; Bobby Kendall; Mr. Kendall; Mrs. Kendall; Mr. Prentis; Mrs. Prentis; Trish; Sissy Kendall
Synopsis
High school students Fred and Bobby love each other, but their parents don’t want them to get serious at such a young age. Fred and Bobby make a reasoned case that their “interest in each other brings forth the best qualities” in them both, and are permitted to keep dating each other.
Reprints

They Made Me a Cinderella (Table of Contents: 3)

How Could I Fight Temptation? (Table of Contents: 4)

Genre
romance
Characters
Ronnie White; Carolyn; Miss Foster; Gladys
Synopsis
Carolyn has a crush on fellow high school student Ronnie, even though he has a reputation as a “wolf.” They go on a date and Carolyn discovers the stories were true. She breaks up with Ronnie and vows to be smarter from now one.
Reprints

Title in reprint: "Temptation Was My Weakness"

I Took the Wrong Road to Romance (Table of Contents: 5)

Genre
romance
Characters
Phil Crawford; Jean Harrison; Mr. Harrison; Mrs. Harrison; Ethel Scott; Ray Halsey; Nurse Hendrix; Rita
Synopsis
When her boyfriend Phil enlists in the Army, 16 year old Jean decides to quit school to follow him to camp. She tells her parents the camp is located in a state where she can legally marry him without their consent. Getting a job at the Post Exchange, Jean hopes Phil will propose to her when he completes basic training, but catches him flirting with a nurse and accepts a date from Sgt. Ray on the rebound. They fall in love, but Jean is uncertain if it’s the real thing and decides to go home and finish school. Before she goes, Ray proposes to her and says when she graduates they can be wed.
Reprints

Title in reprint: "I Was Fooled by First Love"