Cover references and depicts a scene from the story "I Misbehaved" inside this issue. 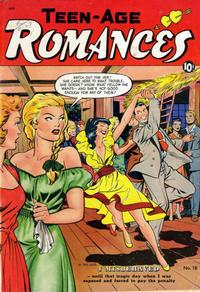 Heart on the Mend (Table of Contents: 1)

On inside front and back covers.

I Misbehaved (Table of Contents: 2)

Genre
romance
Characters
Dotty; Flash Ferguson; Lois; Larry; Bill; Hal Ralston; Thelma; Grace; Art; Charlies; Johnny; Mary
Synopsis
Farmgirl Dotty is dumped by her boyfriend Flash, and feels people are laughing at her as a result. She goes to a dance with Hal, then meets old friend Johnny and smooches with him in a nearby barn. Dotty learns that “town boys” think all farm girls are “free and easy.” Dotty decides to embrace her identity as a farm girl and stop chasing townies. She falls in love with longtime suitor Larry, a decent guy who promises to return for her after he does “his part to restore peace in the world.”
Reprints

Two oblique references to the Korean War: Flash leaves to work in "a war plant," and Larry goes off to "restore peace in the world."

I Scorned Love (Table of Contents: 3)

Genre
romance
Characters
Will Richards; Lee Sharp; Mr. Bailey; Tom; Mary; Mrs. Richards
Synopsis
High school student and drugstore employee Will meets Lee while delivering to a fancy party and begins to date her, although he can’t afford to take her to fancy places. When Lee learns Will is poor, she dumps him. Lee later apologizes but Will says the difference in their socio-economic class is too great. Lee admits she’s just “a poor cousin” of the rich girl who threw the party, and she and Will reconcile.
Reprints

I Carried Things Too Far (Table of Contents: 4)

Genre
romance
Characters
Ginny Haines; Don Thornton; Mrs. Haines; Mr. Haines; Miss Eames; Jim; Cliff Medford; Rhoda Thornton; Mr. Medford
Synopsis
“Plain” Ginny gets a glamorous makeover when her family moves to a new town, hoping to attract boyfriends. She dates Jim but is also attracted to Cliff. Hoping to snag Cliff, she befriends Rhoda, whom Cliff has a crush on. Ginny convinces Rhoda to have a makeover—which repels Cliff—and reverts to her own “honest and natural” self. She also gets a job in Cliff’s father’s greenhouse and this seals the deal: she and Cliff fall in love.
Reprints

Original title: "I Was Tired of Being Good"

I Played Hard-to-Get (Table of Contents: 5)

Genre
romance
Characters
Cheryl; Edmund; Henry; Vera; Craig; Lucy; Ann
Synopsis
Cheryl has a crush on Edmund, but he ignores her. She asks Henry to take her to a lake resort during Easter vacation, where she schemes to attract Edmund’s attention even though he says “I’m not interested in girls---seriously, that is.” Back home, she continues her plotting, even abusing her friendships with others to get an edge. Edmund rejects her because of her “deceitful tricks” and Cheryl decides to change her ways. She regains her friends by being generous and friendly, and Edmund decides he likes her now.
Reprints

Retitled "Love Isn't for Deceivers" in the reprint.