Asking for Trouble (Table of Contents) 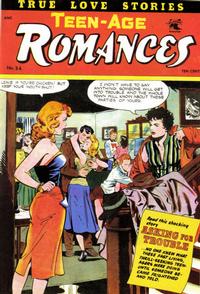 Asking for Trouble (Table of Contents: 1)

Genre
romance; teen
Characters
Grace Nichols; Pat Nichols; Hilda Nichols; Mr. Spreckels; Ruth; Mike Darcy; Jane; Tim Stanton; Betty Turner; Buzzy Neals; Willy; Tom
Synopsis
After his mother’s death, Pat invites his teen-aged sister Hilda to move in with him and his wife Pat. Hilda pretends to be innocent but she soon organizes a series of wild parties among the local high school students. When one of the parties gets out of hand, Hilda’s double-life is discovered and she’s expelled from school.

The final panel of this story says Pat, Grace and Hilda moved to another town and Hilda changed her ways.

My Other Self (Table of Contents: 2)

Genre
romance; teen
Characters
Cathy; Dave Lynch; Judy; Ken Fuller; Ethel
Synopsis
Cathy dates fellow college student Dave but develops a crush on “ancient” grad student Ken, who’s 25. Cathy has a makeover to appear sophisticated and dates Ken, although he tells her that he has a girlfriend back home. Cathy hopes she can change his mind, but when Ken takes his hometown girl to the big game, Cathy goes back to Dave, who is more her type.

More Luck Than I Deserved (Table of Contents: 4)

They Called Me Teacher's Pet (Table of Contents: 5)

Genre
romance; teen
Characters
Amanda "Mandy" Brenner; Gloria Arnold; Rex Matson
Synopsis
High school student Mandy finds young teacher Rex handsome, but fellow student Gloria flirts with him madly. Rex and Mandy become friends because she’s hoping for a scholarship to State University, where he’ll be working on his doctorate in the upcoming year. Rex takes Mandy to the prom; Gloria catches them kissing and Rex loses his job. Now, however, there is nothing to stop Rex and Mandy from expressing their love.

Gloria's hair is red except in one panel on the first page, where it's blonde.
There is a typo in the final panel, where Mandy says “I’ve had to keep my feeings [sic] hidden for so long!”