Superboy is dressed in a type of Robin costume. 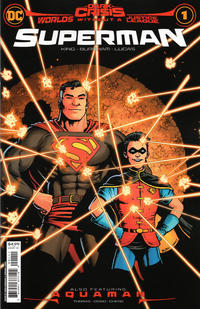 Out There (Table of Contents: 1)

Genre
superhero
Characters
Superman [Clark Kent]; Superboy [Jon Kent]; Lois Lane; Brainiac; Krypto; Parademons; Orion
Synopsis
On a Superman-centric world, Jon Kent grows up helping his father as Superboy. But when Jon learns that there are people suffering on other worlds, Jon questions his father who wants Jon to stay home and protect Earth and not risk drawing the attention of Darkseid's forces to Earth.
Keywords
Dark Crisis; Worlds Without a Justice League

In this story, Superboy is dressed in a type of Robin costume.

First Line of Dialogue or Text
The Justice League has fallen.

Recap of the death of the Justice League that reveals that Pariah has trapped the essence of each hero on custom-made worlds which are known as the Worlds Without a Justice League.

This page is placed after page 1 of the main story.

Aquaman has Everything (Table of Contents: 3)