Menace of the Mimic! (Table of Contents) 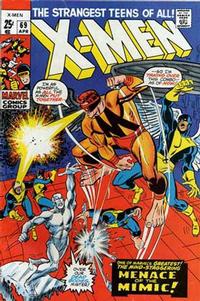 The Supreme Sacrifice (Table of Contents: 1)

Genre
superhero
Characters
X-Men [Professor X [Charles Xavier]; Cyclops [Scott Summers]; Marvel Girl [Jean Grey]; Angel [Warren Worthington III]; Iceman [Bobby Drake]; Beast [Hank McCoy]]; Bolivar Trask; Master Mold; Sentinels
Synopsis
With the X-Men captured, Xavier heads back to investigate a fallen Sentinel to try and figure out what stopped it. The X-Men escape and battle the Sentinels but it is the timely intervention of Professor X and the self sacrifice of Dr. Trask that stops Master Mold and saves the day.
Reprints

Lo! Now Shall Appear-- the Mimic (Table of Contents: 2)

Genre
superhero
Characters
X-Men [Professor X [Charles Xavier]; Cyclops [Scott Summers]; Marvel Girl [Jean Grey]; Angel [Warren Worthington III]; Iceman [Bobby Drake]; Beast [Hank McCoy]]; Zelda Kurtzberg; Vera Cantor; Mimic [Calvin Rankin]
Synopsis
Bobby and Hank tussle with mysterious Calvin Rankin, who beats them by mimicking their powers. Calvin then has an encounter with Jean at a restaurant. Realizing he is dealing with the X-Men, Calvin follows Jean home and asks to join them. Once he has absorbed all of their powers, he battles them and captures Jean. The team follows him to his hideout deep in an old mine. Mimic uses his powers to uncover a machine his father built that will allow him to keep the combined powers for good. Xavier allows Mimic to use the machine which doesn't give him powers but strips his mimic powers away.
Reprints

Panel 1 of page 20 cut to make room for Statement of Ownership, which appears at bottom of page.