In addition to the publisher’s address, the indicia also lists an address for “Terrytoons, Inc.”, 271 North Ave., New Rochelle, N.Y.

This cover gag is later reworked for the cover of Paul Terry’s Terrytoon Comics (St. John, 1951 series) #84 (January 1951), featuring Mighty Mouse on a television screen frightening off a hungry cat. The progression of Mighty Mouse from theatrical short subject to television staple is noted by these covers in tandem. 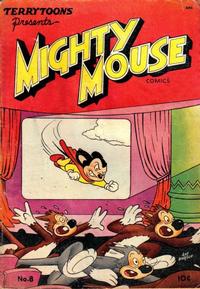 The Most Amazing Factory-To-You Introductory Offer Ever Made to Magazine Readers Not One… Not Two… But ALL 3 (Table of Contents: 1) (Expand) /

The Perils of Pearl Pureheart (Table of Contents: 2)

First installment of the wacky Mighty Mouse sub-series “The Perils of Pearl Pureheart”, patterned after the melodramatic cinematic “Perils of Pauline”. Though the series often sports “Episode Numbers” (sometimes ridiculously high episode numbers, at that), it is not a continued saga, but an issue-self-contained series of satirical perils and escapes, over many diverse settings and locales, that runs throughout the various Mighty Mouse comics published by St. John – including many reprints in later St. John issues. Unlike stories in the “regular” St. John Mighty Mouse continuity, which would feature Mitzi Mouse, The Claw, Professor Ohm, etc., this series utilizes Pearl Pureheart and Oil Can Harry, recurring characters from the series of Mighty Mouse theatrical animated shorts – and uses them to great humorous advantage.

A Strange Adventure (Table of Contents: 3)

First Line of Dialogue or Text
This is the oddest invitation I've ever received.
Feature Logo

The Prince of Mousetania and Cinderella appear as mice. All other storybook characters appear as their traditional selves.

The House Builders (Table of Contents: 4)

First Line of Dialogue or Text
One summer's day, three mice were walking through the woods just outside Terrytown.
Genre
anthropomorphic-funny animals; superhero
Characters
Jack; Henry; Tom (three mice); Mighty Mouse
Synopsis
Three mice, Jack, Henry, and Tom, decide to build themselves a new house at the top of a high hill overlooking Terrytown. As the work-effort mounts, the mice begin to take increasingly ill-advised shortcuts to complete the job. A storm comes up and turns into a hurricane, showing the mice how unsafe and unstable their house really is. Mighty Mouse saves them from falling to their doom, trapped in their slipshod house - but refuses to help them "rebuild it properly", leaving the would-be builders to learn their own lesson.
Reprints
Keywords
builders; house; know-it-all; learning one’s lesson; shortcuts; storm

First Line of Dialogue or Text
Well, well - It looks like we're going to have a nice tender young chick for dinner.
Feature Logo

Crossover with the Rudy Rooster character from the Dinky Duck feature.

Wings of Doom (Table of Contents: 7)

First Line of Dialogue or Text
In answer to a frantic message from an old friend, the Champion of Justice descends on the camp of Igor, King of the Gypsies.
Feature Logo

A reworking of the 1945 Mighty Mouse theatrical animated short “Gypsy Life”, but without the typical Terry-Toons “operatic stylings” and decidedly set in the St. John Mighty Mouse comic book continuity. For instance, MM’s comics girlfriend Mitzi appears in the story and the two face danger together whereas, in the cartoon, there’s an attractive female Gypsy mouse (that looks like Mitzi) but has no “regular” connection to our hero. Most likely, Tom Morrison wrote both the cartoon and its subsequent comic book version. Artist Connie Rasinski directed the cartoon as well as drew this comics adaptation. – Animation connection credit per Merlin Haas 2020-08-07.

The vampire bat-cats speak a strange variation of the English language, described thusly: "Note to Readers: To understand the mysterious Bat language, cross out 'EELZ' whenever it appears in a word. To write it, put 'EELZ' before each vowel." Example from the story: "EELZOUCH! MEELZY FEELZEET!" = "Ouch! My feet!".

Make Money with Your Own Juke Box Bank (Table of Contents: 8) (Expand) /