[Ex-SKIS Me, Please!] (Table of Contents) 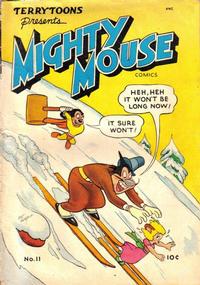 First Line of Dialogue or Text
At the old trading post, we find Mighty Mouse in a duel to the finish with that snake in the grass, Oil Can Harry, as a violent storm rages outside --
Feature Logo

Good Bit: While dueling with swords, Mighty Mouse slices-up Oil Can Harry like a stick of baloney - only to have the "Harry-slices" re-form into Harry himself, as the airborne slices fall one atop another.

This story is a comics adaptation of the 1949 Terrytoons theatrical animated short “A Cold Romance”, directed by Mannie Davis, but referring to Pearl Pureheart as "Little Nell". The "baloney-slicing" gag occurs twice in succession in the cartoon - but (suitably) only once in the comic. Information on "A Cold Romance" supplied by Merlin Haas, 2020.

The Wolf's Pardon (Table of Contents: 3)

First Line of Dialogue or Text
In the main office of the Storyland Penitentiary a famous villain is receiving his release after being a guest of the warden for the last ten years ---
Genre
anthropomorphic-funny animals
Characters
Big Bad Wolf; Storyland Penitentiary warden; Three Little Pigs; Little Red Riding Hood; two rams
Synopsis
Released from prison after ten years, the Big Bad Wolf finds that "life on the outside" ain't what it used to be.
Reprints
Keywords
best-laid-plans; cartoon adaptation; children's story parody; parole; prison; reversal of fortunes; wolf

This story is an adaptation of the 1947 Terrytoons theatrical animated short of the same name, though the last page-and-a-half offers a different ending than does the cartoon.

Shamus the Leprechaun (Table of Contents: 5)

First Line of Dialogue or Text
Did you ever wonder about the leprechauns, fantastic little men of the Emerald Isle?
Feature Logo

Meta Moments: The names “Morrison” and “Donnelly” are on the list of persons the leprechaun is to help. References to Tom Morrison (Terrytoons writer, voice artist, director, and editor of this comic book) and Eddie Donnelly (Terrytoons animator and director). When No Good Bear strikes, the leprechaun is casually reading “Terry Toons” comics.

Terror in the Tropics (Table of Contents: 7)

First Line of Dialogue or Text
Looking down upon the Earth far below, the Champion of Justice is attracted by smoke arising from a tiny island thousands of miles from civilization.
Feature Logo

Though soft-pedaled in the dialogue, it is quite clear that Black Mike and his associate have consumed at least one sacrificed mouse per day, for some time. “Every day we get a tasty morsel without lifting a finger!”

The Time Machine (Table of Contents: 8)

First Line of Dialogue or Text
Sourpuss was returning from a walk around Terrytown one sunny afternoon.
Genre
anthropomorphic-funny animals
Characters
Gandy Goose; Sourpuss; Mrs. Sourpuss
Synopsis
Gandy builds a time machine in his tool shed, in which he and Sourpuss leave 1949 to visit the future world of 1960 – where Sourpuss is confronted by his large, angry, and domineering future-wife who accuses him of “running out on [her].”
Keywords
1949; 1960; time machine; time travel; unwelcome surprise

An exceptional example of these normally mundane text stories. Gandy and Sourpuss are not instantaneously deposited in the year 1960, as often happens in such tales, but experience a rapidly-accelerating series of days and nights while traveling.

Enjoy Hilarious "Monkey-Shines" at Your Next Masquerade Party with These Amazing Life-like Rubber Masks (Table of Contents: 9) (Expand) /

The BEST costs you LESS at these Factory-To-You Savings (Table of Contents: 10) (Expand) /