The Raiders From Saturn (Table of Contents) 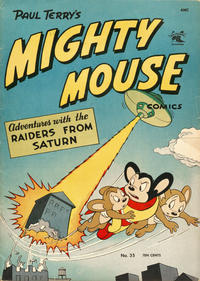 [The Raiders From Saturn] (Table of Contents: 2)

"The Raiders From Saturn" would be an unofficial title, in that it does not appear as part of the story itself, but was derived from the cover caption of this issue. The story is actually untitled.

Boys, Get That Real R.R. Engineer's Thrill That Comes Only with Lionel Trains (Table of Contents: 3) (Expand) /

Lots of Fun and Money! With this Television Bank (Table of Contents: 5) (Expand) /

Borrow Money by Mail! On Your Signature Only (Table of Contents: 6) (Expand) /

Off to the City (Table of Contents: 9)

First Line of Dialogue or Text
Get up! Didn't you hear me? I said get up!
Feature Logo

The Sword Box (Table of Contents: 10)

Heckle and Jeckle [St. John Logo without characters]
Genre
anthropomorphic-funny animals; humor
Characters
Heckle; Jeckle; Dimwit; attractive female magpie
Synopsis
Heckle and Jeckle attempt to fool Dimwit with the old "passing swords through a box while one of the magpies is inside" trick. But what might happen if the bird outside the box is distracted by an attractive lady bird?
Reprints
Keywords
inattentiveness; sword box; swords; trick; unintended slapstick consequences