On sale date of 1955-08-16 from newsdealer notation on the cover of indexer's copy. May or may not be completely accurate, but is reasonable given a cover date of October, 1955.

New painted cover for an issue of reprints. 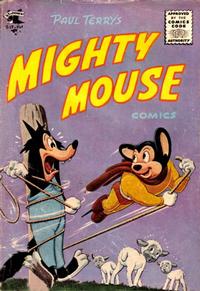 What a Look (Table of Contents: 1)

First Line of Dialogue or Text
It's very valuable. Don't let anything happen to it.
Feature Logo

[The Raiders From Saturn] (Table of Contents: 2)

"The Raiders From Saturn" would be an unofficial title, in that it does not appear as part of the story itself, but was derived from the cover caption of the story's original printing in Paul Terry's Mighty Mouse Comics (St. John, 1951 Series) #35 (November 1952). The story is actually untitled.

The title does not appear in the original printing as well, but only on the cover. When the story was later reprinted in a Gold Key Comic - Mighty Mouse (Western, 1964 Series) #161 (October 1964) - it was given the title "The Invasion of the Bat Cats", making it the only version of the story with an "official title".

Everybody Gives to Cancer (Table of Contents: 3)

Public Service Announcement in comics-form urging everyone to give to the American Cancer Society. Consists of ten individual panels of characters from all walks of life getting money to use for contributions. A kid breaks his piggy bank, a woman takes her stash hidden in the cookie jar, a granny pulls cash from out of her mattress, etc. In the 11th (final) panel, they are all seen rushing to make their donations to the American Cancer Society. Black and white interior page. Between pages 6 and 7 of previous story.

First Line of Dialogue or Text
Gamma Globulin – obtained from human blood – gives protection for a few weeks. However, it is in VERY SHORT SUPPLY. Meanwhile – when polio is around - follow these precautions.
Keywords
polio; precautions; public health; public service announcement

A little girl, something of a cross between Little Lulu and Ernie Bushmiller’s Nancy, demonstrates the suggested precautions… “Don’t mix with new groups”, “Don’t get overtired”, “Don’t get chilled”… “But do keep clean”. Art is contained in four individual circular panels. Between pages 8 and 9 of previous story.

The Serenade (Table of Contents: 5)

First Line of Dialogue or Text
I'm going to serenade the Spanish girl who moved in down the street.
Feature Logo

Off to the City (Table of Contents: 8)

First Line of Dialogue or Text
Get up! Didn't you hear me? I said get up!
Feature Logo

First Line of Dialogue or Text
Tell me, what did you dream last night?
Feature Logo

First Line of Dialogue or Text
Gee, I wish I could do the things Mighty Mouse can!
Feature Logo

Meta Moment: Dinky is reading a copy of Paul Terry's Mighty Mouse Comics. Black and white on inside back cover.