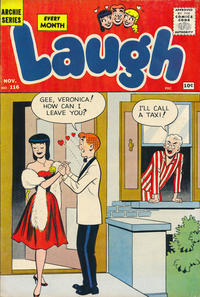 The Flower Pickers (Table of Contents: 1)

Genre
humor; teen
Characters
Archie Andrews; Jughead Jones; Reggie Mantle; Betty Cooper; Veronica Lodge
Synopsis
Jughead and Reggie tell Archie they're going to pick flowers for Veronica. Archie decides he'd better buy some flowers for Veronica and ends up getting a delivery job to pay for a bouquet. When he gets to Veronica's house, he finds that Jughead and Reggie are picking flowers from the Lodge greenhouse.
Reprints
Keywords
flowers; Fourth Wall; greenhouse

Betty breaks the Fourth Wall on page four and talks directly to the reader.

The Price Is Right (Table of Contents: 3)

On the House (Table of Contents: 4)

The Big Switch (Table of Contents: 5)

Many Happy Returns (Table of Contents: 6)

Genre
humor; fashion; teen
Characters
Katy Keene; K. O. Kelly; Randy Van Ronson; Officer O'Brien
Synopsis
Katy gets a boomerang from a fan in Australia. The others refuse to believe it will come back and keep getting hit in the back of the head when it does.
Keywords
boomerang

Woggon dedicates the story to the fans in Australia and lists 12 of them, with addresses. One outfit design by Gilbert Lopez, Jr. (Tucson, Ariz.).

The World of Jughead Is the World of Fun! (Table of Contents: 7) (Expand) /

The Bells Are Ringing (Table of Contents: 8)

Two for the Show (Table of Contents: 14)