Redrawn from the cover of Pep Comics #79 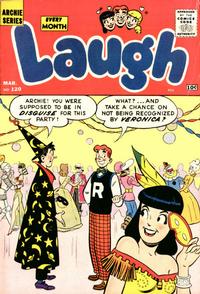 Gift of Gab (Table of Contents: 3)

Page to color. The flesh tones have already been added.

A Leopard in Paris (Table of Contents: 5)

List of 47 persons (ages 7 to 16) desiring pen pals. In addition to the United States, Canada, India, West Pakistan, Okinawa, and England are represented.

Genre
humor
Characters
Archie Andrews; Veronica Lodge; Mme. Schapanelli
Synopsis
Veronica sends Archie to Mme. Schapanelli's dress shop to pick up a new dress. While he's there he gets recruited to be a model for a publicity photo shoot. Veronica comes by later and gets the wrong impression.
Reprints
Keywords
dress shop; photo shoot