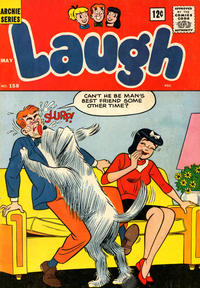 Double or Nothing! (Table of Contents: 1)

Genre
humor; teen
Characters
Archie Andrews; Jughead Jones; Betty Cooper; Veronica Lodge; Rachel Jones
Synopsis
Betty and Veronica have both dumped Archie for his usual crime of dating both of them on the same night. But jealousy makes them change their tune when they see him out with Jughead's pretty cousin.
Reprints
Keywords
cousin; telephone

Genre
humor; teen
Characters
Moose Mason; Midge Klump; Midge's father; Miss Grundy; Reggie Mantle
Synopsis
Three two-panel gags about Moose's stupidity: Moose listens to music by ear; Moose has a mind like a blotter, he gets everything backwards; Midge has to stop Moose from throwing her father out of her house.
Keywords
blotter; guitar

All in the Stars! (Table of Contents: 4)

Midge's last name is given as "Taylor" in this story.

Spectacular Is the Only Word for It! (Table of Contents: 5) (Expand) /

First Line of Dialogue or Text
If you like to meet new friends!
Characters
Li'l Jinx (cameo)

List of 49 persons (ages 7 to 16) desiring pen pals. In addition to the United States, countries include Canada, Northern Ireland, and Jamaica.

Genre
humor; teen
Characters
Josie; Melody; Pepper; Alexander Cabot III
Synopsis
Josie is feuding with Pepper. She writes a nasty note to Pepper and asks Melody to deliver it, but Melody meets Alex and forgets all about the note.
Reprints
Keywords
bowling