First Line of Dialogue or Text
Archie, you're about to get a tremendous charge from this new record!
Genre
humor; teen
Characters
Archie Andrews; Veronica Lodge; Hiram Lodge
Synopsis
Archie is about to get it in the end.
Keywords
power drill; record player 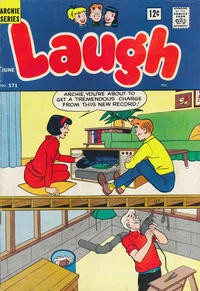 Wheel of Fortune (Table of Contents: 1)

The Butt of the Joke (Table of Contents: 5)

When reprinted in Jughead and Archie Double Digest (Archie, 2014 series) #16 the story is signed by Bill Vigoda.

Genre
humor; children
Characters
Li'l Jinx; Hap Holiday
Synopsis
Hap buys Jinx a new doll in an attempt to get her old, disintegrating doll away from her. Jinx is excited about her new doll, but that night Hap is dismayed to find Jinx has the old doll in bed with her.
Keywords
doll; vacuum cleaner

First Line of Dialogue or Text
Stamp collectors are having a ball with a my pen pal club!
Characters
Li'l Jinx (cameo)