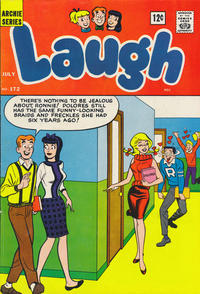 Suits Me (Table of Contents: 1)

First Line of Dialogue or Text
It took you a week to get Marty interested in you...
Genre
humor; teen
Characters
Betty Cooper; Veronica Lodge
Synopsis
Veronica knows how to treat a boy once she lands him.

Later remade as "The First Step" in Betty and Veronica #119 (November 1965). Both stories are partly based on a scene from the 1957 movie "Designing Woman," where a dancer/choreographer played by Jack Cole beats up a bunch of thugs who are threatening Gregory Peck and Lauren Bacall.

Ring a Ding (Table of Contents: 9)

Genre
humor; children
Characters
Li'l Jinx; Hap Holiday; Ga Ga
Synopsis
When Hap accidentally breaks the ring Jinx got out of a gumball machine, she just doesn't want another ring. She wants another ring exactly like that one.
Reprints
Keywords
gumball machine; ring

First Line of Dialogue or Text
Girls and boys have been writing in to tell me...
Characters
Li'l Jinx (cameo)