Art in the logo does not appear in this issue.

Later redrawn for the cover of Archie... Archie Andrews Where Are You? Comics Digest Magazine #7. 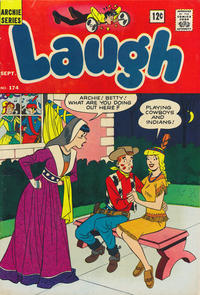 The Fan (Table of Contents: 1)

The Big Brain (Table of Contents: 6)

The World of Jughead Is a World of Laughs (Table of Contents: 7) (Expand) /

First Line of Dialogue or Text
Pen Pals from all over the world!
Characters
Li'l Jinx (cameo)

List of 48 persons (ages 7 to 13) desiring pen pals. In addition to the United States, countries include England, Canada, Jamaica, and Australia.

Archie Gets All the Brakes (Table of Contents: 13) (Expand) /

Mrs. Andrews and the girls sing "We're going to wash those men right out of our hair!", a slightly-altered lyric from "I'm Gonna Wash That Man Right Outa My Hair" from the 1949 musical "South Pacific."