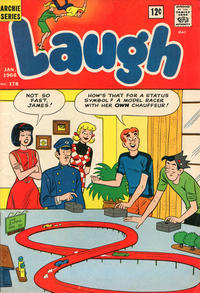 The Traitor (Table of Contents: 1)

Genre
teen
Characters
Archie Andrews; Veronica Lodge; Hiram Lodge; Reggie Mantle
Synopsis
Veronica snubs Archie on an anniversary to date Reggie. But circumstances give him a chance to get even.
Reprints

Archie's anniversary is of the day he got his driver's license and the dialogue intimates that it's an anniversary he and Veronica have celebrated multiple times. So if Archie is vaguely sixteen to seventeen, what exactly is the age a person can get a driver's license in Riverdale?

Genre
humor
Characters
Veronica Lodge; Archie Andrews
Synopsis
Archie catches Veronica with another guy and she can't understand how he found her.

The handsome guy with Veronica is named Richard, possibly after editor Richard Goldwater as a joke.

Genre
humor
Characters
Li'l Jinx; Greg; Hap Holiday
Synopsis
Frustrated when their parents won't buy them sting ray style bikes, Jinx and the other kids decide to form a rock band like The Beatles in order to make money like The Beatles do.
Reprints