Pencil credits given on Neal Adams website (it was previously credited to Adams). Mike Napolitano states that he owns the original cover art, where the Infantino/Anderson signatures appear under the Superman figure (but were whited out). Curt Swan stated to Mike Napolitano that he made extensive corrections to the Superman figure (6 September 2004). Credits before this change were solely to Curt Swan for pencils. 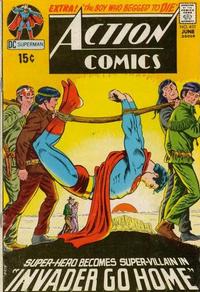 Where the Action Is / letters page / 1 page (report information)

The Boy Who Begged to Die! (Table of Contents: 3)

Job Number
B-871
Genre
superhero
Characters
Superman
Synopsis
Superman must decide between the life on one orphan or the lives of an entire town.
Reprints