On sale date from the publication date reported to the U.S. Copyright Office found in the Catalog of Copyright Entries, Third Series, Volume 25, Part 2, Periodicals, January-December 1971. Copyright registration number B666359.

Daughter of the Demon! (Table of Contents) 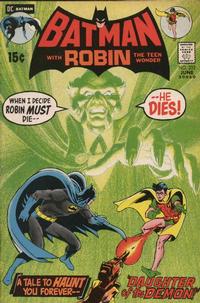 How Many Models Have You Started But Never Finished? (Table of Contents: 1) (Expand) /

Daughter of the Demon (Table of Contents: 2)

The Weird World of Aurora (Table of Contents: 3) (Expand) /

Military Men! Your Credit Is Good (Table of Contents: 4) (Expand) /

Appears in between pages 11 and 12 of the story.

The Best Baseball Game Cannot Be Purchased in a Retail Store! (Table of Contents: 11) (Expand) /