The photo of "Wilbur Palm" is actually of Kinney/Warner executive Marc Iglesias, per Neal Adams (April 2010). 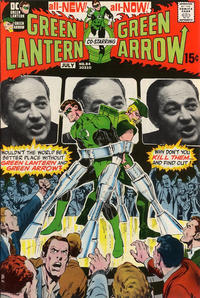 Peril in Plastic (Table of Contents: 1)

Job Number
S-771
Genre
superhero
Characters
Green Lantern [Hal Jordan]; Green Arrow [Oliver Queen]; Carol Ferris; Black Hand [Wilbur Palm]; Dinah Drake Lance [Black Canary]
Synopsis
While Carol Ferris is in Piper's Dell, the sea wall protecting the town begins to give way, so Hal responds as Green Lantern. After saving the town, GL is given a tour of the plastic factory. Weakened by gas emitted by the plastic pins produced there, he is unable to fight back, so he sends his ring to Green Arrow. When he revives, he finds that his old enemy Black Hand uses the pins to keep the community under his control. He sends GL and Carol out into the streets to face the wrath of the townspeople, but Green Arrow arrives in time with GL’s ring, and GL traps Black Hand in his own plastic.
Reprints

Credits for script, pencils and inks confirmed from Julius Schwartz's editorial records, provided by DC Comics. There's a suggestion that Alan Weiss inked the splash page, but it hasn't been verified yet.

The plastic pin, the "kaluta," is named after artist Michael W. Kaluta. There's also a sound effect that says "Ka-loooota."