No Comics Code seal on this issue.
This issue has variants: 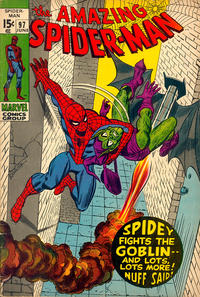 In the Grip of the Goblin! (Table of Contents: 2)

Backgrounds likely inked by Tony Mortellaro, as he was the background inker on ASM #98 (a billboard seen on the splash page of #98 reads "BACK BY MOR").

First Line of Dialogue or Text
Dear Stan, It seems that your competitors have come up with a winner, and a format which is popular.
Characters
Spider-Man; Gwen Stacy; George Stacy

The Avengers [superhero]; The Hulk / promo (ad from the publisher) / 0.4 page (report information)