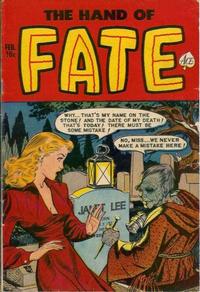 It Is Written: I Die Tomorrow! (Table of Contents: 1)

Genre
horror-suspense
Characters
Fate
Synopsis
Paul Hulick is a gambler who cheats on his girl. He meets Fate (the hooded figure) and learns that he must die tomorrow (by drowning) unless he changes his behaviour. He does so but refuses to hand Fate back his book so that he can change the death-entry. On the run he falls into an open manhole and drowns in the sewer.
Reprints

Scripting credit from Frohman's own records, which are now being sold on the collectibles market. (Frohman kept track of his writing by storing the scripts with copies of the comic books they appeared in. Now those comics are being sold with the scripts attached.)

Genre
horror-suspense
Synopsis
"One afternoon, in the year 1903, professor Gerald Osgood and his young assistant Curtis Waite discovered the long buried tomb of pharoah [sic!] Rah-Tep..."
The tomb is protected by the depiction of a half man- half beast. It comes alive and kills the professor.
Reprints

Secret of the Witch's Urn (Table of Contents: 3)

Genre
horror-suspense
Synopsis
Robbie Donegal saves a witch out of a pool of quicksand and gains magic items: a horn to summon the witch and do his bidding and an urn to hold the ashes of his enemies. The condition: no one else must touch these items. After living reckless for some time, Donegal marries and his wife touches the urn. The witch demands a sacrifice and hunts him down to a bog of quicksand, where he dies.

Genre
fantasy-supernatural
Synopsis
"The arabs of Tunisia are great lovers of thoroughbred horses, trained for racing..."
When famous racing horse Hadid dies, it runs a last race as a ghost horse.

Genre
horror-suspense
Characters
Fate
Synopsis
Chess champion Nicola is a vain and arrogant man. He is challenged by a mysterious opponent to a game of life and death involving human chess figures killing each other as the game unravels. The opponent is the late chess champion Kovacs, who returns from the dead to teach Nicola a lesson. Fate steps in, sends Kovacs back to the afterlife and claims Nicola's life himself - for his vanity (and because he has "seen what no mortal can live to repeat").

The Tartar Curse (Table of Contents: 6)

Genre
horror-suspense
Synopsis
A musician believes to own a magical dagger, laden with a tartar curse. He almost kills the woman he loves, but learns that he only fell prey to blood poisoning.

Vengeance from a Restless Grave (Table of Contents: 7)

Genre
horror-suspense
Synopsis
Amos Langford is mocked by the whole town for his ugly appearance. He dies in an accident, is revived in a lightning-rich thunderstorm and comes back - with a vengeance. He wants to open the dam and flood the town, when his coat is caught in the machinery and is he hurled into the waters.