Editing
A. A. Wyn (Managing Editor)

Some information for this index from Saltarella via the GCD Error Tracker, August 2010. Editor credit from Statement of Ownership. 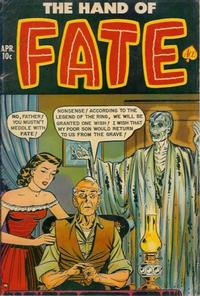 One Awful Night with a Fiend (Table of Contents: 1)

Genre
horror-suspense
Synopsis
Movie starlet Jane is made an offer she can't refuse: If she digs up foreign film director Count Marko from his grave and resurrects him, she will make her way to stardom yet. When Jane finds out that she will be starring in a "snuff movie" she has second thoughts. Jane escapes the fiend by setting the place on fire - and is recued by a handsome young movie producer looking for talent.
Reprints

Genre
fantasy-supernatural
Synopsis
"In an art gallery in London, one may see three paintings by Reginald Coleman..."
His first painting was a boat - which then exploded. His second a skyscraper - which then collapsed. His third a selfportrait - then he got struck dead by lightning.

Genre
horror-suspense
Synopsis
An Englishman and his daughter in India interfere with local religion and superstition. They are cursed by a cult of Shiva worshippers. The curse comes true: Shiva persues them and the daughter and her bridegroom perish horribly in flames.
Reprints

Genre
fantasy-supernatural
Synopsis
"The tomb of Napoleon Bonaparte is to be found at Les Invalides in Paris..."
A nightguard there encounters the ghost of Bonaparte mounting his white horse.

Bride of the Golden Skull (Table of Contents: 5)

Genre
horror-suspense
Characters
Fate
Synopsis
Clive Douglas steals a golden skull from a mountain temple in Tibet. Visions of the talking skull, commanding him to take him back, haunt his nights. A mysterious oriental woman can persuade Douglas to hand her the artefact. She reveals herself as the age-old Bride of the skull. Douglas goes insane.
Reprints

Scripting credit from Frohman's own records, which are now being sold on the collectibles market. (Frohman kept track of his writing by storing the scripts with copies of the comic books they appeared in. Now those comics are being sold with the scripts attached.)

The Hand (Table of Contents: 6)

Genre
horror-suspense
Synopsis
Jules comes into possession of a black mahagony box containing a severed hand. The hand fulfills his every wish. But he shouldn't have said: "I wish I had never set eyes on you"...

Variation of the horror classic "The Monkey's Paw" by William Wymark Jacobs (published in 1902).

Lure of the Zombie Diamonds (Table of Contents: 7)

Genre
horror-suspense
Synopsis
Gambler Willie learns of a South Seas tresure hidden in a valley only the dead can enter. He manages to get in, but comes out barely alive, broken and insane.
Reprints

Not sure about the Cameron credit.
If so, it is very strangely inked, and not by Cameron (maybe Mario Rizzi?).

Statement of the Ownership, Management, and Circulation (Table of Contents: 8)