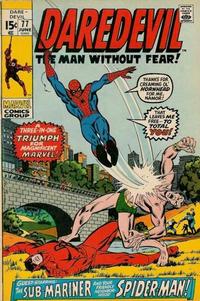 ...And So Enters the Amazing Spider-Man (Table of Contents: 1)

Story continues between Sub-Mariner (Marvel, 1968 series) #39 and #40. Pages 12 and 13 are half art/half ad. The colors on page 6 are completely wrong as Peter Parker has black hair and Mary Jane has blonde. Colors credit from Bullpen Bulletins page in Daredevil #76, which says Palmer colors the Daredevil stories he inks.

Funky Facts and Freaky Fables, from the Fickle Finger of Forbush! (Table of Contents: 4)

Stan's Soapbox discusses the problem with word balloons and captions on covers--half the readers want them and half the readers don't. A lot of art changes on various titles. Tom Palmer is the father of his first child, a girl. Sal Buscema is the father of his second child, a boy. There's a Hulk poster on the wall in one scene of the movie "There's a Girl in my Soup" and a character is reading a copy of Captain America in the movie "Brewster McCloud." Roy Thomas appeared on KFVS-TV in Cape Girardeau, Mo. The Academy of Comic Book Arts announces nominations for 1970. Also an all-text hand-lettered blurb.

At bottom of second letters page. Promo for Captain America #139, "now on sale." Layout splits that issue's cover image and logo and adds blurbs. Colors are different than the published cover.