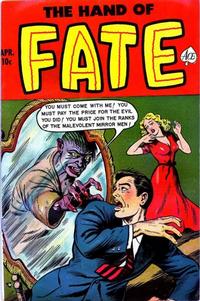 The Sorcerer's Spectacles (Table of Contents: 1)

Genre
horror-suspense
Synopsis
Vernon Hutchins, a bad man and gambler, comes upon a magic pair of glasses. If he looks through the sorcerer's spectacles, devils appear and kill everyone he is looking at. Fate steps in and makes Hutchins glance at his own reflection in the mirror.

Genre
fantasy-supernatural
Synopsis
"A true story that became legendary in the mining towns of Wales in Scotland, occurred at the turn of this century..."
Coal miner Sweeney gets buried in a cave-in, but his ghost helps his comrades to dig themselves out.

Genre
horror-suspense
Synopsis
"In a small town in France, there is told a true tale of a strange and awesome occurrence. In 1923, Peter Rouan, a tombstone carver, had amassed a small fortune..."
Rouan gets stabbed to death by robbers looking for his money. They only find tombstones - with their names engraved upon them.

Orchids from the Dead (Table of Contents: 5)

Genre
horror-suspense
Synopsis
Lonny Quinn works as gravedigger in a penal colony off the coast of Mexico. He finds out that orchids blooming on the graves of the convicts inhabit their souls and eventually bloom into full grown new bodies. Quinn kills himself and is being shipped to freedom. As he grows a new body, Quinn learns that he will remain a zombie.

Looks like a rushed job by Ken Rice who returns to Ace horror books after five months' absence.

The Sabre of Gregory Tamoric (Table of Contents: 6)

Genre
horror-suspense
Synopsis
In a trial of courage, Gregory Tamoric is supposed to stick a sabre into a grave at midnight on the local cemetery. He accidentally pierces his long cloak with the weapon, trips, falls down and dies of shock - thinking a skeleton has grabbed his foot.
Reprints

Story is accompanied with two paintings by Lou Cameron (signed).

Genre
horror-suspense
Synopsis
After Victor Tein kills his rival in a mirror foundry, he is haunted by Fate and his victim's ghost appearing in mirrors. Victor can't shake Fate and dies in a car crash he stages to wipe out all traces of his crimes.