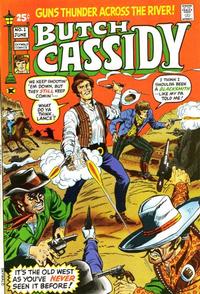 Thunder Across the Border (Table of Contents: 1)

The Man Who Came Back (Table of Contents: 2)

Genre
western-frontier
Characters
Jim Gordon (Texas Ranger); Flash (horse); the Sheriff; Sue Merriwether (his daughter); unnamed outlaw
Synopsis
An outlaw gets revenge on a sheriff by kidnapping his daughter-not knowing who she really is. It's up to Ranger Jim Gordon and Flash to rescue her.
Reprints

The Man Who Lost Yesterday (Table of Contents: 3)

Genre
western-frontier
Characters
Maverick (originally Red Mask); The Pillowcase Gang; Bronc (Maverick's horse)
Synopsis
When Maverick falls victim to a masked band of outlaws, he not only loses his prisoners but his memory as well! And when a number of false Red Masks appear in Bullet - looting and robbing, the real Red Mask discovers that he is blamed for it!
Reprints

A modified Tim Holt story, with the lead character's name, changed from Redmask to Maverick.

Vikings Out West (Table of Contents: 4)

The No-Gun Sheriff (Table of Contents: 5)

Genre
western-frontier
Characters
Sheriff; Billy Nevada; Big Mike Scanlon
Synopsis
A tenderfoot out west to take over the Sheriff's job that had belonged to his Father, who was gunned down, has to learn that there is a time and place when guns must be used for good.
Reprints

There is no Billy Nevada logo on the first page of the story.

Wanted For Murder! (Table of Contents: 6)

Genre
western-frontier
Synopsis
A peculiar adventure for Butch who rides into the town of Paradise where his every move or gesture seems to violate a city ordinance. When finally sentenced for his multitude of offenses - Butch must escape jail, only to come up against the "Marshal" who enforces the law in his own way.