No Approved by the Comics Code Authority seal. On-sale date calculated from on-sale dates of preceding and succeeding issues.
This issue has variants:

The Goblin's Power! (Table of Contents) 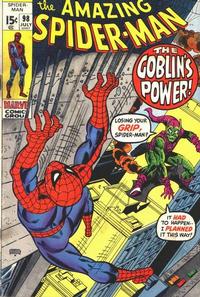 Job Number
590-Z
First Line of Dialogue or Text
Just as Peter Parker is about to summon the doctor, to aid his sick friend, Harry Osborn--disaster strikes--
Feature Logo

Though not officially credited, a billboard seen on the splash page reads "BACK BY MOR", indicating Tony Mortellaro inked the backgrounds.

First Line of Dialogue or Text
Dear Stan and John, I want to raise an issue of general policy on which Marveldom Assembled must be allowed to vote.
Characters
Spider-Man; Iron Man; Conan; Thing; Hulk; Black Widow; Captain America; Thor