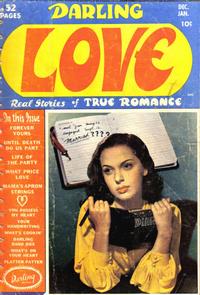 Forever Yours! (Table of Contents: 1)

Genre
romance
Characters
Grant Perry; Tom Baily; Sheila Crane; Derek Watson; Walt Garnet
Synopsis
Magazine photographer Sheila is assigned a story on New England fishing boats. Captain Grant and his crew think it’s bad luck to have a woman aboard. When a storm wrecks the boat, Grant saves Sheila and has to protect her from the vengeful crewmen. They’re rescued and Grant and Sheila find they are in love, but he refuses to give up the sea. Sheila waits anxiously while Grant sails out to rescue some fellow fishermen: he returns safely.

You Possess my Heart (Table of Contents: 2)

Poem with an illustration.

Your Handwriting (Table of Contents: 3)

Genre
romance
Characters
Rick Hayes; Meg; Mrs. Hayes
Synopsis
Department store sales clerk Meg dates concert pianist Rick. Rick’s mother thinks Meg is a gold-digger and opposes their relationship. Meg fears Rick will be influenced by his mother, but when he risks injury to his hands to save her from a foul ball at a baseball game, Meg and Rick’s mutual love is confirmed.
Reprints

Until Death Do us Part (Table of Contents: 5)

Genre
romance
Characters
Kathy Fiske; Steve Crandall; Chet Rogers
Synopsis
Army doctor Steve and Red Cross representative Kathy meet in Europe during World War II. They are reunited after the war in New York, where Kathy is now a copywriter and Steve is a medical researcher. They plan to wed but Steve learns Kathy is suffering from a potentially fatal blood clot in the brain as a result of a war injury. He tries to keep this a secret from her but she finds out. They decide to carry on with their lives and enjoy their love as long as they can.

The Life of the Party (Table of Contents: 6)

Genre
romance
Characters
Jack Davis; Tad Hendricks; Midge Rawson; Joyce Kane; Shep
Synopsis
As a boy, Jack overcomes his loneliness by becoming an extroverted “life of the party,” and continues this into college. Jack falls for Joyce at a party but learns she is embarrassed by his constant clowning. Jack decides to change his ways and Joyce admits she loves him.

Narrated by Jack (the second story in this issue narrated by a man).

What Price Love? (Table of Contents: 7)

Genre
romance
Characters
Val Phillips; Gil Randall; Mrs. Phillips; Charlie Payne; Mr. Phillips
Synopsis
Recent college graduate Val is courted by rich but humble Gil and her hometown boyfriend Charlie. When Gil’s car crashes, Charlie risks his life to save him, and Val realizes Charlie is the one she loves. They wed.

What's on Your Heart? (Table of Contents: 8)