On sale date as listed in the Catalog of Copyright Entries, Periodicals, July-December 1950, page 190, registration number B258012.

I Get What I Want! (Table of Contents) 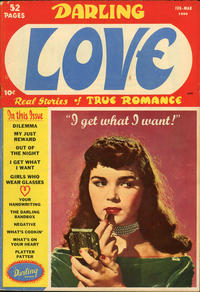 First Line of Dialogue or Text
How to keep the evil tongues of small-town gossip...
Genre
romance
Characters
Chris Davis; Frank Kelly; Jane Worth [also as Jane Brown]; Joe Turner; Mr. Gressen; Miss Johnson; Mrs. Worth; Tony Field
Synopsis
Jane is raised by her strict and snobbish mother. Unfairly named as the “other woman” in a divorce case (the result of a trick), Jane leaves town due to the scandal and gets a job, incognito, in a department store in another town. Jane dates her boss Chris, but lives in fear of being exposed, particularly since Chris hates liars. Jane returns to her hometown and the divorce fraud is exposed, clearing her name. Chris shows up and reaffirms his love for her.
Keywords
Capitol City; Mapleville

My Just Reward (Table of Contents: 3)

First Line of Dialogue or Text
Look, it's Van Grey! Isn't he handsome!
Genre
romance
Characters
Jo Darrow [also as Jo Grey]; Mr. Blair; Mr. MacWilliams; Van Grey
Synopsis
Reporter Jo thinks actor Van is a cheap showoff but changes her opinion when they fall in love. However, after their wedding, she becomes jealous of his career and fakes an illness so they’ll move to an isolated ranch in the West. Jo’s trick is exposed and Van returns to New York, alone. As the story ends, Jo prepares to follow him and beg his forgiveness.
Keywords
Broadway; New York City; reporter; Star News; wedding

The last panel in which Jo is preparing to return to New York, it looks like she's loading a pistol.

First Line of Dialogue or Text
From the hundreds of recipes which you submitted...
Genre
non-fiction; domestic
Keywords
French fried hot dogs

Out of the Night (Table of Contents: 6)

First Line of Dialogue or Text
I have stood on the brink of torment...
Genre
romance
Characters
Dave Towers; Ellen; Nate Bender; Mrs. Thomas; Seth Thomas; Sheriff
Synopsis
Ellen’s abusive stepfather Seth insists she marry rich Nate, but she loves farmer Dave. Dave sells his farm to Nate to get enough money so he and Ellen can elope. Seth tries to stop them and is killed in a fight with Dave, who is arrested. Dave serves four years in prison but Ellen is waiting for him when he is released.
Keywords
farm; jail; murder

First Line of Dialogue or Text
The touch of suspense is wonderful -when you...
Genre
non-fiction

First Line of Dialogue or Text
Boys don't make passes at girls who wear glasses...
Genre
romance
Characters
Alan Kent; Fred; Loretta; Mrs. Blake; Miss Hastings; Myra Blake
Synopsis
As a child, Myra is forced to wear eyeglasses and her classmates mock her. When she’s older, she tries to avoid wearing her glasses, feeling they make her unattractive to boys like Alan. Years later, Myra gets a job with an insurance company and is shy and anti-social. She bumps into Alan, now a lawyer. He apologizes for his unthinking comments before, and they fall in love. Myra thinks Alan is cheating on her, but the “other woman” is his married sister Loretta. She wears glasses too, and advises Myra to “control these false feelings of inferiority.” Myra agrees to marry Alan.
Keywords
glasses; library

First Line of Dialogue or Text
One day when heartbreak came to me
Genre
romance
Keywords
An eight line poem.

First Line of Dialogue or Text
Budget Beaney: It's easy to make a beaney to...
Genre
non-fiction; fashion

First Line of Dialogue or Text
I was determined to have all the things girls...
Genre
romance
Characters
Alice; Dodd Towers; George; Mr. Harris; Miss Allen; Miss Hansen
Synopsis
Alice moves to the city to become a model, but has no success until she accidentally meets department store owner Dodd. He gives her a job and they also fall in love. When she discovers there is a “Mrs. Towers,” Alice quits and gets a job posing for cheesecake magazines. Ready to go home in disgrace, Alice meets Dodd at the station and he says “Mrs. Towers” is his sister-in-law. Dodd and Alice reconcile.
Keywords
Fifth Avenue; New Jersey Palisades; New York City; Uniontown

First Line of Dialogue or Text
It is evident from your handwriting that you have no...
Genre
non-fiction; advocacy

Ellyn Lee analyzes the handwriting of Virginia and Lou Ann.