The cover is the same as the splash panel on the first story in this issue. 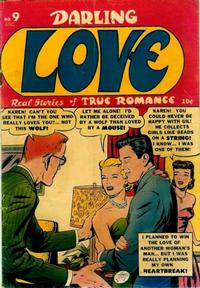 Genre
romance
Characters
Karen Porter; Joe; Gil Lawrence; Vivian Taylor; Tessa
Synopsis
Karen and her roommate Vivian go on a double-date with Gil and Joe. Karen is attracted to Gil rather than the “mousey” Joe, even though Vivian thinks she loves Gil. While Vivian is away, Karen dates Gil but he’s not serious about her. Karen leaves so she doesn’t have to confess to Vivian. Karen bumps into Gil with yet another woman and realises he wasn’t worth her trouble. She makes up with Vivian and is reunited with Joe, who really cares for her.

On page 2, Gil is called "Bill" in a caption and "Gil" in a dialogue balloon in the same panel.

I Loved a Coward (Table of Contents: 3)

Genre
romance
Characters
Carol; Jerry Cole; Rocky; Swifty Stevens
Synopsis
Carol is a nurse on a construction project. She and worker Jerry fall in love but she thinks he’s a coward because he won’t stand up to bullying Rocky. Jerry is a boxer who thinks he killed a man in the ring; when he learns his opponent survived, Jerry feels free to thrash Rocky. Carol is confused but can now love Jerry with a clear conscience.

My Love Was for Sale (Table of Contents: 4)

Genre
romance
Characters
Joyce Baker; Mrs. Baker; Mr. Baker; Greg Taylor; Alice
Synopsis
Department store clerk Joyce grew up poor and wants to marry a rich man. She saves her money for a vacation at a swanky resort hotel and, posing as a rich woman, tries to catch wealthy Greg as a husband. They fall in love but he confesses he’s just a salesman. Joyce returns to work. Greg shows up and says he knew she wasn’t rich all the time. However, their love is real.

Genre
romance
Characters
Dick Jarman; Tessa Grainger; Harry; Dr. Seymour Combs; Mrs. Combs; Mrs. Adams
Synopsis
Office worker Tessa and Army officer Dick fall in love, but she presses him to propose marriage and he breaks off their relationship. She becomes depressed and faints from “complete mental fatigue.” Dr. Seymour helps her recover and urges her to move in with him and his mother. Later, he asks her to marry him and she agrees, but only out of gratitude. However, Dick reappears and apologizes for his previous attitude. Tessa breaks up with Seymour then realizes Dick won’t ever really change. Seymour takes her back and they will wed.
Reprints