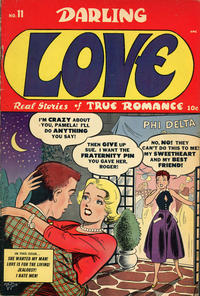 She Wanted My Man (Table of Contents: 1)

Love is for the Living (Table of Contents: 2)

Genre
romance
Characters
Doreen Abbott; Martha Abbott; Agnes; Charles Watts; Greg Saunders
Synopsis
Office worker Doreen reveres her late father’s memory and is shocked when her mother Martha says she’s engaged to Charles. Greg consoles Doreen and they fall in love. Greg reveals that he’s a widower, and asks Doreen if she would deny him and her mother a second chance at love. Doreen apologizes to her mother and agrees to marry Greg.

Genre
romance
Characters
Jack Walton; Linda Walton; Evelyn
Synopsis
Linda, recently wed to Jack, is jealous of the other women in his life, including his secretary. When Evelyn, Jack’s old girlfriend, moves back to town, Linda worries. Finally, her jealousy provokes an outburst from Jack. Linda realizes she’s gone too far and begs him to forgive her.

Genre
romance
Characters
Hester Harlow; Mrs. Spanner; Gary Harlow; Gene Harlow; Liz; Richard [Dick] Chambers
Synopsis
Carhop Hester is fired for tossing coffee on a lecherous customer. Hester is a single mother who hates men because her husband Gene cheated on her. She's hired as a secretary by private detective Dick, who falls in love with her. Hester rejects his romantic advances because of her previous bad experiences. Dick saves Hester’s young son from a mad dog and tells Hester that Gene is dead, and he wasn’t unfaithful to her after all. Hester can now allow herself to love Dick.

Previous indexer credited Bob White with art but the realistic style of this story is completely different than White's cartoony cover art.