Special thanks are credited to John Layman and Sal Regla in this issue.

This issue is dedicated to Clay Moore.
This issue has variants: 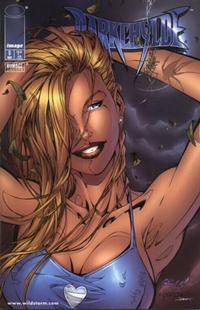 credits and indicia over a background image of spiders on spiderwebs and bats. The image has the depiction of a tear slightly above the middle of the page through which you see a photographic image of the hair and eyes of a woman.

The Promise (Table of Contents: 2)

First Line of Dialogue or Text
Back when I was younger and I had friends we used to play a little game.
Genre
fantasy-supernatural; horror-suspense
Characters
Darkchylde; War; Piece
Synopsis
Ariel is lonely on her birthday, but War and Piece make her a cake and bring her presents to cheer her up. She pressures Piece into telling her information about her mother.

All this, and Knightmares too! (Table of Contents: 11)