Indexed from a scan from http://digitalcomicmuseum.com. 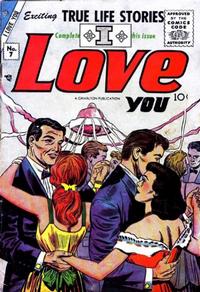 Genre
romance
Characters
Marian; Phil White; Ernie Baker; Doug Gordon
Synopsis
Diner waitress Marian agrees to marry telephone lineman Ernie, but starts secretly dating his friend Doug. She breaks up with Ernie. Ernie injures Doug in a fight atop a telephone pole and is arrested. However, Doug won’t press charges and Ernie is freed: he and Marian reconcile, her “infatuation with Doug…washed clean out of [her] heart.”
Reprints

Story is likely inventory from Mainline.

My Errant Heart (Table of Contents: 2)

Genre
romance
Characters
Margot Doane; Gary Reagan; Ken Blake; Miss Gibbons
Synopsis
After her father dies, Margot takes an active interest in the failing department store she inherits. Assisted by manager Gary, Margot learns the business. Margot falls in love with Gary but he wants to make the store successful before he commits to a romance. Margot flirts with ad manager Ken and implements his ideas to make Gary jealous. Gary resigns and Margot discovers Ken has been planning to get a job with another company. A new company buys the bankrupt store and installs Gary as the manager again; he hires Margot as his secretary and she’ll have another chance with him.
Reprints

The Good Fixer (Table of Contents: 3)

Memory of Love (Table of Contents: 4)

Genre
romance
Characters
Francie; Lee Comers; Frankie Bassik; Helen; Mr. Bassik; Mrs. Bassik; Francie's mother
Synopsis
Francie agrees to marry Lee, but she can’t forget her first boyfriend, Frankie. When she learns Frankie is coming back to town, Lee fantasizes that he’ll be rich and they’ll resume their romance. Lee breaks up with Francie because she won’t face reality. Frankie shows up but is “heavy, slovenly—balding—and crude!” He borrows money from Francie, and she realizes she’s been wrong. Francie asks Lee to give her another chance.
Reprints

Lee's dialogue in the final panel is changed from the original version. Here, he says "I have some friends in the town we're going to. You can stay with them until you buy your trousseau for our wedding!" In the original, he says "We can get all that on the way! We'll call it your trousseau--darling!" Clearly the Comics Code wanted to make it clear that Lee and Francie wouldn't be "together" in a strange town until they are legally married.