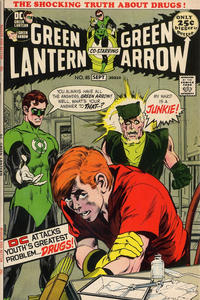 Job Number
S-829
Genre
superhero
Characters
Green Lantern [Hal Jordan]; Green Arrow [Oliver Queen]; Roy Harper [Speedy]; Mr. Browden
Synopsis
When Oliver is jumped by junkies, he is shocked when one of them shoots him with one of his own arrows. Green Arrow, now teamed with Green Lantern, follows the leads to find the junkies, including the missing Roy Harper, who lets GA assume he has been working undercover. Later, the junkies lead the heroes to an airplane hangar, but help the dealers knock out GL and GA and inject them with drugs. Roy arrives in time to get the messed up duo home. There he tries to explain the attraction of doing drugs, but Green Arrow remains baffled, and is shocked to soon find Roy getting ready to shoot up.
Awards
Reprints
Keywords
drugs

The Weird World of Aurora (Table of Contents: 4) (Expand) /

Military Men! Your Credit Is Good (Table of Contents: 5) (Expand) /

First Line of Dialogue or Text
Dear Fans...
Synopsis
Letter from editorial director Carmine Infantino on the inflation in the USA and National Periodical Publications raising the price of its comics.
Reprints

Appears in between pages 20 and 21 of the story Snowbirds Don't Fly.

The Strange Trial of Green Lantern! (Table of Contents: 11)

The Giant Will Be Waiting for You (Table of Contents: 13) (Expand) /