Mystery Rustlers of the Rio Grande (Table of Contents) 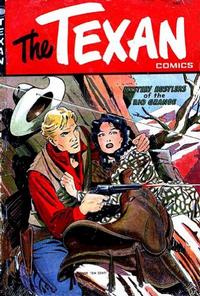 Peril on the Prairie (Table of Contents: 2)

JVJon at Digital Comics Museum has Baker + Larsen and Battefield, but can't spot any nose shadows and chins by Larsen or faces by Battefield. Art ID by Steinar Ådland, March 2011.

Larsen can best be recognised by his faces with a marked black shadow under the nose on bi-characters like the crooks and the posse here, and the hats with very broad brims pulled back in the neck.

JVJon at Digital Comics Museum has Appel/Blaisdell plus Baker and Peters. Can't spot any of them, except a probable Blaisdell on the crude horses, so this one is uncertain.

Can you find the Secret Clues... (Table of Contents: 6)

Comparing the art with the only known signed story on GCD, "Simba" in Jungle Comics #115, the rendering of fine rounded califlower clouds match this artwork, and JVJon at Digital Comics Museum has Walsh on it too. Art ID by Steinar Ådland.

Where you find fun... you find Cracker Jack (Table of Contents: 8)

Half page drawing of kids playing and buying Cracker Jacks.

Shot in the Dark (Table of Contents: 9)

Synopsis
We guarantee that you can't duplicate this sensational value for less money anywhere in America today!

Picture of a wallet, ball point pen and pocket flashlight to order by mail.

At a Hollywood Party (Table of Contents: 11)

Order Margaret O'Brien Candy Kitchen and make your own candies shown in a short comic strip.