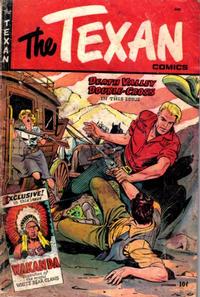 Bjorklund has a unique style, fine horses with long face, low broad brimmed hats always flat on the head, and drop-over gun holsters with two straps. Everything very authentic. He drew many of the stories and all the covers for Tex Granger.
Art ID by Steinar Ådland, March 2011.

Trap the Guilty (Table of Contents: 5)

Vadeboncoeur has Gutwirth as most probable.

Genre
western-frontier
Characters
Ted Burns; Clara Burns; Pancho (robber); Rose Howard; Rafe Stellar (Faro dealer and killer)
Synopsis
Countless men have met their doom in Death Valley searching for gold. Burns and his daughter struck it rich before they were jumped and robbed. Clara got away and traps the guilty.
Reprints

Howard Larsen is identified by his very broad brimmed hats back in the neck, looking like butterfly wings, and his faces with small eyes. Usually a heavy dark shade under the nose and inside and under the ear. His bodies are crude and awkward. Art ID by Steinar Ådland, March 2011.

Hours and Hours of Solid Entertainment (Table of Contents: 7) (Expand) /