The Texan Comics is the title of the comic on the cover.

From Shaun Clancy's Facebook page, "Comics History Exchange", confirms cover inking work by Ray Osrin (September 24, 2014). Osrin was one of Matt Baker's inkers. Osrin also maintained copies of the covers he worked on the walls of his studio. Included in a picture of the studio (owned by Clancy and posted to this Facebook page) was this cover. Originally inks were credited to Matt Baker due to his signature on the cover. 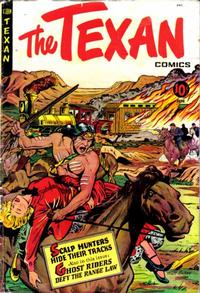 on inside front cover
Speed had many fillers in St. John western titles.

Speed had many fillers in St. John western titles

Original title: "The Last Ride of the Masked Mavericks."

Speed had many fillers in St. John western titles

First Line of Dialogue or Text
In the desperate struggle to clear his name, Tom Cullen haunts the western badlands...
Genre
western-frontier
Reprints

Tracy the Outlaw (Table of Contents: 8)

on inside back cover
Speed had many fillers in St. John western titles.