From Shaun Clancy's Facebook page, "Comics History Exchange", confirms cover inking work by Ray Osrin (September 24, 2014). Osrin was one of Matt Baker's inkers. Osrin also maintained copies of the covers he worked on the walls of his studio. Included in a picture of the studio (owned by Clancy and posted to this Facebook page) was this cover. Originally inks were credited to "Matt Baker ?". 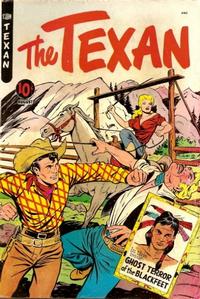 A Double-Cross in Disguise (Table of Contents: 1)

on inside front and back covers

First Line of Dialogue or Text
The frontier lawmen had failed in every attempt to catch the McGilvery gang redhanded.
Genre
western-frontier
Reprints

JVJon scan at Digital Comics Museum has "Forte ?" here, and compared with other Forte work it seems probable.

Ghost Terror of the Blackfeet (Table of Contents: 3)

In the previous version of the story, Prairie Kate was called Buckskin Belle.

Indians on Horseback (Table of Contents: 5)

In the previous version of the story, the Lone Vigilante was called the Bold Buckaroo.